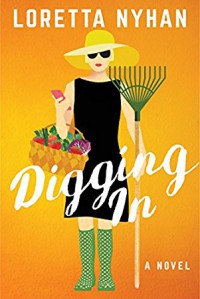 Paige is dealing with the death of her husband, Jesse due to a car accident.  They had a 17 year old son, Trey.  Paige works for an ad agency as a graphic designer.   She loses her boss, Frank to a heart attack whom she considered a second father. Frank’s son, Lukas takes over his dad’s business and makes it more of a success than it already was.   Paige and her friend, Jackie were afraid of losing their jobs.

Paige decides to build a garden after she digs holes in her backyard. It rains and Trey uses the mud from the rain that fell as his own personal slip and slide.  The first competition Lukas devises for Landon Cosmetics had two people losing their jobs including Paiges’s bff Jackie but she stood up for herself and is back but if she loses next competition... There will be no severance package.

I’m loving the relationship blooming between Paige and Sean. I love all the characters and the hang at Guh but I seriously want to throat punch Lukas for being such a jerk.

I loved Bill Eckhardt, Sean, Paige and Trey.  This was one of the funniest, lovable books I’ve ever read.    Petra was a complete hoot.  I loved her.  Highly  recommend it