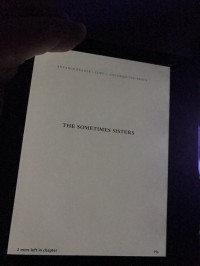 This was my first book of Ms. Brown’s, I fell in love with the characters immediately.  I love Annie, Zed and the girls, Dana, Tawny, Harper and Dana’s daughter, Brook.  They all come together after Annie, their grandmother passes away. Zed is Annie’s friend. In her will, Annie gave each of the girls a job in order to keep the hotel that she and Zed ran open and in the family.  Dana is considered the black sheep of the family as she’s the daughter conceived in an affair her father had while married to her mother.

The girls get together to say goodbye to their grandmother, Annie.  Tawny tells Dana that she’s a good mom to Brook.  Tawny told Dana that she thought Harper was sent away to boarding school because she might have been pregnant.

Harper and Tawny get into a bar fight because Harper took another woman’s bar stool and sat down.  In return, the sister of the woman scorned cut a beer bottle and cut Harper’s chin.  Tawny then proceeded to knock the woman out onto the cold hard floor.

The girls got together to talk and spill secrets after Harper tried to drown herself. Harper revealed that she was pregnant at sixteen and her mom sent her away to an unwed mother’s home.  Her daughter, Emma Joanna was 9 on 3/30 and Wyatt was the father.  Dana revealed that Brook’s father cheated on her and hit her and Brook.  She left him.  Tawny has yet to reveal her secret that she was kicked out school for holding drugs for an ex boyfriend.

Brooke was on in school suspension because Ryson wanted her to hold drugs for him but she wouldn’t so she punched him after he said something derogatory about her friend, Cassidy.  Flora, their cleaning lady retired sooner than expected because Cassidy and Ryson were caught in a compromising position  after Cassidy’s mom was babysitting a client’s children and was taking care of Cassidy, her granddaughter while Cassidy’s mom worked.

I absolutely loved this book.  It will definitely not be my last of Ms. Brown’s books